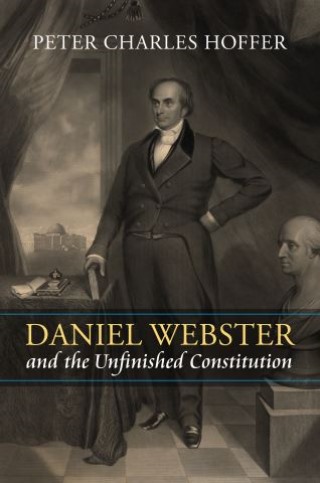 Daniel Webster and the Unfinished Constitution

Daniel Webster and the Unfinished Constitution reveals Webster as the foremost constitutional lawyer of his day. Peter Charles Hoffer builds a persuasive case that Webster was more than a skilled practitioner who rose rapidly from his hardscrabble New Hampshire origins. Hoffer thoroughly documents the ways in which Webster was an innovative jurist. While Chief Justice John Marshall gets credit for much of our early constitutional jurisprudence, in fact in a series of key cases Marshall simply borrowed Webster’s oral and written arguments.

For Webster, Marshall, and many lawyers and jurists of their day, professions of adherence to the Constitution were universal. Yet they knew that the Constitution could not be fixed in time; its text needed to be read in light of the rapidly transforming early republic and antebellum eras or it would become irrelevant. As Chief Justice Marshall explained in Bank of the United States v. Deveaux (1809): “A constitution, from its nature, deals in generals, not in detail. Its framers cannot perceive minute distinctions which arise in the progress of the nation, and therefore confine it to the establishment of broad and general principles.” But were these “broad and general principles” themselves fixed? For Webster there were landmarks: the Contract Clause and the Commerce Clause. While others were exploring and surveying the Northwest Territory and the Louisiana Purchase, Webster set out to map the spaces in the constitutional and legal landscape that were unmarked.

Peter Charles Hoffer provides an insightful and timely study of how Webster’s analysis of three key constitutional issues is relevant to today’s constitutional conflicts: the relationship between law and politics, between public policy and private rights, and between the federal government and the states, all of which remain contentious in our constitutional jurisprudence and crucial to our constitutional order.

Peter Charles Hoffer: Peter Charles Hoffer is distinguished research professor of history, University of Georgia, and the author of numerous publications, including Rutgers v. Waddington: Alexander Hamilton, the End of the War for Independence, and the Origins of Judicial Review, The Free Press Crisis of 1800: Thomas Cooper’s Trial for Seditious Libel, and, with Williamjames Hull Hoffer and N. E. H. Hull, The Supreme Court: An Essential History, Second Edition, all from Kansas.